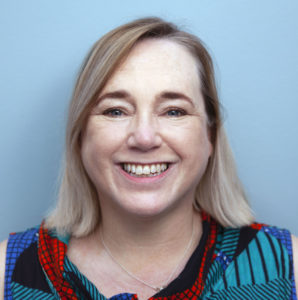 Bec has had a varied career. For seven years she was the live-in Principal of a residential university college (living with over 200 students), a lecturer in Cultural Studies, Australian Studies and Tourism at Flinders University; an Associate Dean at Flinders University Hall (residential) and a lecturer/tutor in the Centre for Staff Development at Flinders University where she worked with new tutors and lecturers to help them develop their teaching skills. Throughout this period Bec contributed many conference papers, published in academic journals, edited academic work and was a long time representative on the Flinders University OHS Committee. Her areas of academic research included Australian film and theatre, theories of the body, postcolonialism, and religion in Australian performing arts. Her PhD remains incomplete because she threw herself into life in college – working with young and emerging adults.

During her career in the arts, Bec was privileged to work alongside directors such as Kim Durban and Nigel Jamieson, and to work as an actor, dramaturg and assistant director in Melbourne and Adelaide. During her time at CPA she was fortunate enough to work with international voice teachers Frankie Armstrong and Jo Estill and the wonderful mime Jacques Le Coq. She is the former General Manager of Urban Myth Theatre Company, and it was because of the relationships she formed there with the children and parents that she decided to continue the work of Urban Myth through SAYarts.

Bec’s teaching specialisation is Speech and Drama. Bec has her Associate Diploma from AMEB in Voice (Teaching) as well an Assoc Dip Performance Centre for the Performing Arts (Where she was taught by the wonderful David Kendall, Peter Dunn and Jenn Havelberg), a BA Hons in History and English from The University of Adelaide, and heaps of professional development quals for working in adult education. Most recently Bec has worked for Patch Theatre (fill-in Executive Producer) and Restless Dance Theatre in arts administration. Alongside managing SAYarts she also works for the History Trust of South Australia, Peta Shannon Speech and Drama and SA Speech and Drama.

Bec’s job at SAYarts is all the administrivia, keeping us up to date with legislation pertaining to working with children & young people, networking, applying for grants, and generally making sure that everyone is happy!

“I feel so privileged to work with these students – it is a very rewarding experience knowing that for some of these kids, these classes are the best thing that happens to them all week. What we do here is worthwhile. The arts produce creative, empathetic, thinking, well-rounded human beings. SAYarts contributes to a positive and sustainable culture of problem solving and innovation.” Bec Pannell 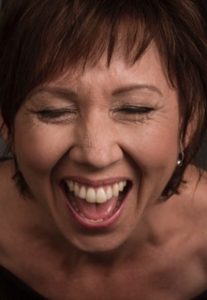 Currently working with multiple companies as a drama workshop facilitator and also Social Worker, Tamara Lee Collins draws on her extensive and varied experience as an actor. After graduating from acting college in 1998, she had the pleasure of extensively touring South Australia and interstate with Splash Theatre Company, and once based in Adelaide she went on to work on various theatre productions with companies such as: Chopt Logic, Holden Street Theatres, Junglebean and SULIS Theatre Company from the UK. In 2008 she performed the one-woman play “A Solitary Choice” which went on tour to the Edinburgh Fringe, Seymour Centre in Sydney, Theatre Works in Melbourne and the Kansas City Fringe in the US. In the five.point.one Adelaide premiere of ‘That Face’ she played Martha for which she won the Adelaide Critics Choice Award. She was in Flying Penguins’ production of “The Dark Room” for the State Theatre Company’s Umbrella initiative, Tutti Arts production; “Eye Music”, “This Storm” with The Un-Rest Cure – written by Ben Brooker and she has worked with Van Badham on “Late Night Story”. Her Film and TV credits include ‘Look Both Ways’, ‘Closed for Winter’, ‘The Marriage of Figaro’ ‘McLeod’s Daughters’ and Tim Minchin’s ‘Upright’. She has also enjoyed taking part in various short films such as; ‘Aunty Joan’s Friendly Grotto’, ‘One Mans Treasure’, ‘The Luck of the Irish’, ‘Things Have Changed’, Police training video ‘Dark Blue’ and ‘Davi’, directed by Victoria Cocks. Tamara also has extensive experience participating in role-plays for various exam environments, drama workshops and training. She is a Social Worker and Drama Facilitator as well as an Actor to and looks forward to combining her arts practice with the health profession in a creative, community-focused context. Tamara’s most recent production was Sarah Peter’s play Blister at Holden Street Theatres in July 2019 for which Tamara had to create multiple characters.

We recently asked Tamara why she loves working with young people:

Why have you chosen to work with kids?

Working with kids is something that I continually find inspiring and joyous. It is a privilege to get to know the young people we work with. I love the challenges, flexibility & commitment that the work involves.

What is the most surprising thing you learnt about yourself working with kids?

I’ve learned that I can embrace chaos as a positive aspect to a workshop, or a project, or life. Working within this area means there will be moments of (productive & creative) chaos and embracing that is something I find essential. *by chaos, I don’t mean a workshop without structure. I mean the type of natural chaos that we need to move through as a group in order to find the really good creative stuff!

Why is youth theatre important in the arts ecology?

Youth theatre is about finding and enhancing personal strengths, contributing to a community, belonging, skills development, confidence building, acceptance, learning resourcefulness… the list could go on and on. It’s a learning platform that can set young people up as a foundation towards a fulfilling arts career. Or a valuable addition to life skills development.

What delights you most about working with kids?
Their voracity and uniqueness. It inspires me all the time and keeps me laughing! 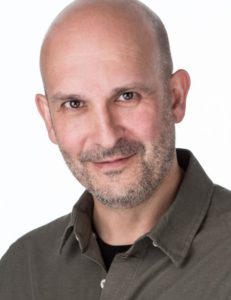 Laurie was originally trained at Salford University in the UK, where he was lucky enough to have a real grounding in acting. He then went on for more formal drama training at ALRA (The Academy Of Live & Recorded Arts), in London.

Laurie has been acting professionally for almost twenty years now, and in that time he has worked in TV, Theatre and Film.In 2016, he moved with his family from his hometown of Manchester in the UK, to Adelaide in Australia. As well as acting here, he also teaches Speech and Drama at several schools.

Laurie’s interests outside of the performing arts include: an obsessional passion for alternative/independent music, and script writing for both stage and screen. Laurie teaches for Star Academy, SA Speech & Drama, Peta Shannon Speech & Drama and for SAYarts he takes our Bowden classes. 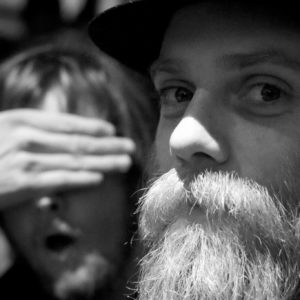 Alan Grace has long been a SAYarts favourite. He wrote Goddess on a Highway (2019) and I Still Have No Friends (2018) for Claire Glenn and On the Fringe. He is highly regarded as an actor, theatre-maker and playwright. Alan graduated from AC Arts (Acting) in 2007, and was Dramaturge/Assistant Director for floogle’s Ollie and the Minotaur for Fringe 2008.The Embryos, written by Alan, was produced in Fringe 2010, and received a nomination for the Jill Blewett’s Playwright’s Award. In 2010, for Duende he directed Theatre Ltd, wrote Pinter in the Pub for Urban Myth, and participated in Vitalstatistix’ Adhocracy.

In 2011, his play No Hello premiered in Fringe, garnering a Inspace Development Nomination, and was listed in dB magazines Top Ten Shows of the Year. He conceived The Play-Off Challenge and directed Bigger than Beanbag for it. Duende premiered Slicing and Dicing!!! directed by Peter Dunn.

In 2012, Duende premiered German Diary and Truth Teller – which he produced and directed. Second years at AC Arts performed Hysterical Blindness, directed by David Mealor with dramaturgy from Aarne Neeme. He produced the Second Play-Off Challenge and directed the winning play Red Ink by Duncan Graham, and participated in Adhocracy 2012 with the resident artists, Parachutes for Ladies. His play sex play premiered in the Blackbox season in November that year, and Reckless Abandon was read for five.point.one’s Reading Sessions.

In 2013 The Shelter is a Trap, for Urban Myth/No Strings Attached Theatre of disability, an epic featuring a cast of more than twenty women, with many scenes performed exclusively in AUSLAN was comissioned. He  participated in Forever Now initiative, working with APHIDS and Jeff Kahn, which will send a golden record of art into space. He is currently working on new collaborative projects with female identifying artists in Adelaide.
Alan is really excited to be working with SAYarts in the capacity of writing mentor. 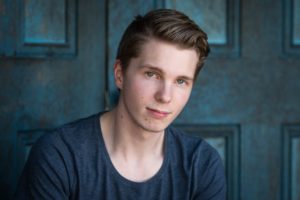 Timothy is an actor with a fantastic movement and dance background! For SAYarts Tim has assisted Laurie at Bowden, and is part of the new team at Burnside teaching Acting Essentials. He also helped create our Unforgettable Memory Box program for the 2019 October school holidays. He is a graduate of AC Arts, and brings a wealth of performing experience including 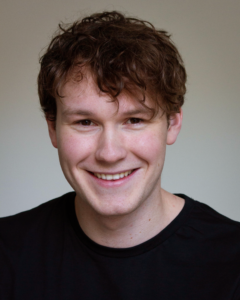 Angus is a graduate of the Adelaide College of the Arts – attaining his Advanced Diploma of Acting in 2017. Since graduating Angus has secured varying roles in TV and theatre. He starred as Kane in Duncan Graham’s One Long Night in the Land of Nod during Fringe Festival 2018, and Steve in Chris Isaac’s Flood in 2019 with the Cabbages and Kings Collective – both of which won BankSA’s ‘best theatre’ Fringe Weekly Award in their respective years. He has performed live shows to school audiences with ActNow Theatre Company and educational shows about road safety with RAA. He has also undertaken creative developments with State Theatre Company of South Australia and Patch Theatre Company.

Angus has starred in TVCs for BusinessSA and University of Adelaide and has also appeared on ABC’s Gruen XL. He made his TV debut in Season 3 of Matchbox Pictures’ and Channel 7’s Wanted starring alongside Rebecca Gibney and Geraldine Hakewill in 2018. Angus has recently finished performing a season of Patch Theatre Company’s new show ZOOM – of which we was a key deviser and performer. He has also toured their existing work Me and My Shadow across regional areas in Australia. 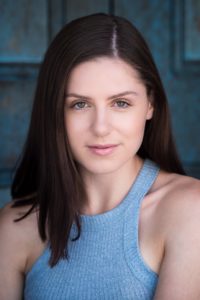 Erin is currently working full time on Mortal Kombat! She is a graduate of AC Arts, and has worked for Splash Theatre Company touring with The Book Show. Erin is also busy creating a Fringe show for kids.

Harry has been with SAYarts since our beginning, first as a member of Mythconception with Nicole Allen then moving into Troupe Mythos. For SAYarts Harry performed the lead role in Aftershocks (Adelaide Fringe), Zeus in This Bloody House, The Prince in Grimmer. He now assists Claire Glenn with the Little Tackers and Tackers and often gets to participate in their antics. Harry is a musician – his instrument is the trombone and we love that about him. Here’s Harry performing (with his trombone) in Bad Jelly The Witch for performance day 2019.

SAYarts is committed to the safety and wellbeing of all of our students and members. As such, we take Child Safety and First Aid seriously. We are also keenly aware of the needs and issues that surface during the development of children and in particular, emerging adults.

Rebecca Pannell has completed training in Child Safe Environments. She also has over 11 years experience as a live-in Dean/Principal on University campuses in a pastoral, academic and operational role. She was central to the development of pastoral care and wellbeing programs and training across the residential community sector in Australia.

Our core tutors are all working creative professionals with accredited training through a national theatre school such as AC Arts. They have decades of experience and all are police checked.

All of our child-aged workshops have two tutors: a full tutor and an assistant tutor who is usually recruited from the Senior Ensemble to train as a tutor. This helps protect the children and the staff. All of our Assistant Tutors are police checked. All tutors undergo a workshop at the beginning of each year that outlines their responsibilities before, during and after workshops.